Our pals over at Exclu Magazine via i09, tipped us off to the official reveal of four new Star Wars Black Series figures, which will be based on characters from The Clone Wars Season 7, in particular its Siege of Mandalore arc.

The four figures are Walmart exclusives, and will be available for pre-order tomorrow at 10 AM EST, over on their Con page. Each will retail for $25.99, so let’s hope they don’t get sucked up by dickhead flippers.

The four figures are Ahsoka Tano, a 332nd Clone Trooper, a Mandalorian Loyalist, and a Mauldalorian Super Commando. You can check out a few images of each figure below, but EM has more if you need additional poses.

Personally, I think they look absolutely amazing, so I’ll be stressing tomorrow during the pre-order window like the rest of you FOMO-types. Happy collecting!

RUMOR: Hayden Christensen Back As Anakin for Kenobi 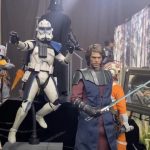