Disney and Lucasfilm have released a clip from the upcoming episode of Star Wars Resistance, which is titled, “The First Order Occupation”.

In the clip, Doza is talking to Commander Pyre about the First Order’s security forces that are now stationed on the Colossus. Apparently, the First Order Troopers aren’t respecting Doza’s authority, because he’s complaining to Pyre that they’re starting to overstep their charge. It appears that Doza is committed to having the First Order on the station until the Pirate threat has been put down.

Unfortunately for Doza and the Colossus though, the First Order has played them and the pirates, so Doza is in a bad spot and there’s nothing he can do about it. They have their foothold on the Colossus now, and based on Doza’s personal droid, it seems as if they’re making the station safer, so Doza can’t boot them for not doing their job, but he’s also stuck with them now and they have the upper hand thanks to their ruse.

The new episode – “The First Order Occupation” – will also be available SUNDAY, FEBRUARY 3rd (12:01 a.m. PT) on the DisneyNOW app and Disney Channel VOD, giving kids and families access to the series wherever and whenever they want to watch. 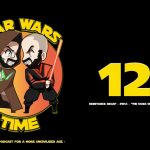