According to THR, Christopher Lloyd has been cast in The Mandalorian, and will be featured in its third season whenever it airs.

Unfortunately, the only detail on Lloyd’s role for The Mandalorian is that it is classified as a guest star type of gig, so he will probably pop up in an episode in a similar fashion to other guest stars like Michael Biehn in Season 2.

Lloyd is most famous for his role as Doc Brown in the Back to the Future saga, so one may speculate that he could be playing some sort of scientist role in Mando. How about a cloning specialist, or someone who may be involved in whatever the Remnant is up to with Grogu’s blood and the cloning facility that used to be on Nevarro?

Christopher doesn’t strike me as a Mandalorian or another hunter, so I do think his role will be somehow linked to the cloning narrative teased over the first two seasons of the show. What say you? 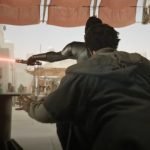