If THR’s reporting rings true, it sounds like Charlie Barnett will be reuniting with Leslye Headland to work on her The Acolyte series after the two worked together on Russian Dolls.

According to the report, Barnett is currently in talks to finalize a deal to join the pre-Prequels era Star Wars project. No details on the type of character he would be playing have been released.

If Charlie’s casting is legit, he’d be joining Amandla Stenberg, who is the only officially confirmed cast member to date, as well as Jodie Turner-Smith, Lee Jung-Jae, and Manny Jacinto.

Plot details have been minimal for The Acolyte series, which will be set about 100 years before The Phantom Menace, and will likely follow a young Force user’s journey to the Dark Side of the Force.

Nick and I will talk more about this rumored casting on next week’s episode of the SWTS, so don’t forget to tune into the Star Wars Time Show on a weekly basis via our podcast platforms or via YouTube if you prefer the livestream angle. 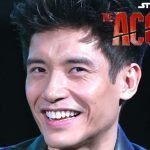 Manny Jacinto Rumored to be Joining The Acolyte Cast