Andor is about 6 weeks out from release, and you know what that means… leaks and images! Yes, the leakers of the Star Wars universe have been attaching their tentacles to anyone who will talk to them so they can give you all the information that you could find out from actually watching the show weeks before the show actually releases. So, if you aren’t a fan of leaks, move past the spoiler section below and check out some of the new images from the show that came out via SFX Magazine.

So, the leak out of the Reddit community today is that Cassian Andor’s real name may not actually be Cassian or Andor. According to Bespin Bulletin, the name that Cassian is referred to early in the show is Cassa or Kassa and they have no idea what his real last name is. What they can confirm is that Andor comes from Fiona Shaw’s character, Maarva Andor, who likely adopts Cassian after his home world is destroyed.

Now for the non spoilery side of things, here are some shots from SFX Magazine that have small bits of character context overlaid on the images. Check them out below.

As we learned within the last couple weeks, Andor will not use the Volume technology at all, so everything you see in these shots are either on location or on sets. The shots definitely give off a more gritty feel than we are used to seeing in some of the more sterile Star Wars environments. 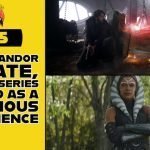