What do you know? A new batch of concept art has leaked from Colin Trevorrow’s Star Wars: Duel of the Fates treatment, and once again the imagery will make fans wonder what could have been.

I went ahead and broke each one down to provide a bit of context based on the leaked draft of the script that we’ve talked about on the show, and have done videos and posts for on this site. While the art is amazing, we all have to remember that this version of the movie still had a living Carrie Fisher attached to it, so while it may look and sound awesome, it would have never gotten made due to Fisher’s unfortunate death.

Check out the new art below! The first batch of art can be viewed after the break if you missed it.

Hey now fans of Star Wars projects that will never be, Matt Heywood here from the Star Wars Time Show to go over yet another batch of leaked concept art from Colin Trevorrow’s Duel of the Fates treatment for Star Wars Episode IX.

These are all brand new shots, so if you watched our first breakdown, there will be no repeats.

Up first we can see a disguised BB-8 on board a First Order destroyer on a Kuat moon.

And the next shot would be of the same plot segment, as we can see the orbital ring that delivers ore to the shipyard, this is what the Resistance team was sent to blow up, but they ultimately fail.

Here we can see what was going on down on Kuat itself.

Up next is a real badass shot of the A-Team trying to get on the Eclipse star destroyer. Look how badass the dudes are in trooper armor, and of course Rey looks like a mix of Han Solo and Luke Skywalker, complete with a double bladed lightsaber. Yes please!

This shot shows them stealing the Star Destroyer from the ship yard like a bunch of bosses.

Here we see Kylo on Moraband being healed, presumably from opening the sith holocron that kind of exploded in his face.

We then see his Mom sporting a ROTJ hairstyle while on Korilev.

The next image features Kylo getting his new mask in a very Vader-esque looking shot.

Apparently at some point the Knights of Ren forced the Team B to crash the Falcon into the ice planet of Wavett.

This is a follow up shot to them being stranded on the planet.

Here’s another look at Bonadan where Rey, Poe, Chewie, and the droids face of with the Knights.

And here’s another shot of the Razor sails they pilot while fighting the Knights.

Speaking of the Ren buddies, here we can see Chewie getting ready to toss one and shoot him like a clay pigeon.

This art shows Kylo approaching the Sith temple on Remnicore.

Kylo continues to explore Remnicore and he even has a droid with him.

This shot of Kylo would be after he meets Tor Vallum and learns how to drain the living force from things.

Up next is a cool looking new concept for a Resistance ship, probably fighting in the Battle of Coruscant.

This is also a cool looking shot as it features an imprisoned Finn on Coruscant, probably catching shit from some Troopers, or possibly talking them over to his cause.

I’m assuming this action shot of the Falcon takes place during the Battle of Coruscant.

Here’s BB-8 making a run for it on Coruscant, probably after R2 got taken out, because you can see him being held by his buddy in the background.

We then get another cool shot of the ground battle on Coruscant.

Here’s a wild looking interpretation of the force cave where Kylo battles Vader.

This is a shot of Rey taking in the temple on Mortis.

And here’s a follow up to that one with her approaching Kylo in the temple of Mortis.

This is apparently concept art for when Rey is taken to the Astral Plane and offered a chance to stay there with the other Jedi or to return to the living.

This is resurrected Rey lifting the Falcon out of the ice on Wavett.

And these final two shots capture the moment when Rey shows up on Modesta to greet Finn, BB-8, and a batch of Force sensitives.

What can I say, would I have loved to have seen this version of Episode 9? Damn, freaking skippy, but let’s remember that this version didn’t account for Carrie Fisher’s passing, so it too would have been drastically altered from what we’ve been shown.

Love it or hate it, the trilogy we got is what it is, so take the best from it and be happy we got some new Star Wars. There’s always the future to look towards if anything else. 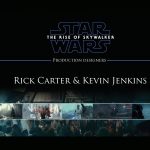 Behind the Scenes on The Rise of Skywalker