Earlier this year, John Boyega voiced his displeasure with the way Disney handled the character arc of Finn and the other persons of color in the Age of Resistance Star Wars trilogy, and it seems like Disney listened to John’s criticisms and wanted to go a step further.

Boyega mentioned his face to face with Disney execs in a recent interview with The Hollywood Reporter.

“It was a very honest, a very transparent conversation,” Boyega says. “There was a lot of explaining on their end in terms of the way they saw things. They gave me a chance also to explain what my experience was like. I’d hope that me being so open with my career, at this stage, would help the next man, the guy that wants to be the assistant DOP, the guy that wants to be a producer. I hope that the conversation is not such a taboo or elephant in the room now, because someone just came and said it.”

This meeting is definitely somewhat of a surprise given Boyega’s attitude towards Disney up until very recently. He had been very vocal on Twitter and other social media platforms about being done with Star Wars and Disney, but a recent quote from an interview with Yahoo Movies may suggest that this meeting with the Disney execs may have caused him to reconsider his Star Wars future.

“I’m a Mandalorian fan, so Lucasfilm is doing very well with the TV shows. An animated show would be dope! We could do it from home.”

Only time will tell is Boyega ever finds his way back to the Finn character, but it is good to see that he is at least open to it. 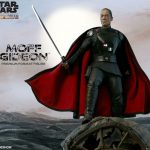