It appears John Boyega may be Mark Hamill’s son after all, thanks to a recent tweet of his to a fan asking how Star Wars: Episode IX will end. Just like Mark Hamill does with these types of questions, Boyega dialed up his Star Wars fan trolling game by a factor of 10 with his reply, which can’t really be classified as made up bullshit, because he’s probably right.

Make sure to watch the below video just as you finish reading John’s reply.

Like Hamill, Boyega has masterfully trolled his Star Wars fans with a cheeky as hell reply, that quite frankly is probably correct, because all movies ultimately end this way before the post-credits pop up. In Star Wars’ case he could have said that it’ll fade to stars, but for the most part he’s being truthful without giving anything away, while also having a bit of fun with Star Wars Nation. That’s why we love guys like John Boyega.

He wasn’t done tweeting about Star Wars though. He replied to a fan that Episode IX has been his favorite Star Wars movie to work on so far, while also hinting that he’s about done with principal photography, so he may be joining Anthony Daniels, who just wrapped his role as C-3PO yesterday. 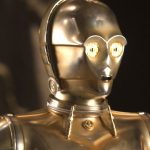