The Book of Boba Fett series has been widely praised by most fans of Star Wars, but as always, there are a group of fans who think the show has ruined the image of Boba Fett from the past. Ming-Na Wen says that these fans may see the show in a different light by the end.

“I really hope that they want to go back and see the whole thing over again in a different light after, you know, knowing how things have–I’m so careful with my words here, how things have evolved, and all these other elements that have come into play.”

Ming-Na went on to reiterate what plenty of fans have been saying since The Mandalorian debuted in November 2019, “Trust John and Dave.”

You know, that’s what’s so great with [producers] Jon [Favreau] and Dave [Filioni]. They are so knowledgeable about this world, about Star Wars, and they’re such huge fans that they know how to set up the pieces and make moves that you don’t even know are coming.

It’s not surprising nowadays to see people disparaging a new Star Wars property, but it is a little odd to write off a show before the 7 episode season has been fully released. I, for one, am certain the finale will give context to the rest of the show and help tie together any loose ends that may be hanging. For those who hate the show, it is hard to tell what could change their opinion.

the book of boba fett
2 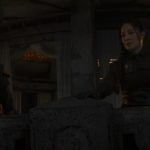