Thanks to an ILMVFX BTS video on the use of virtual sets in The Mandalorian Season 2, we now know that Boba Fett and Greef Karga met during a deleted scene from Chapter 14 – “The Tragedy”.

This is the episode where Grogu gets kidnapped, so Boba and Fennec agree to help Din get him back. They then fly to Nevarro to get some intel on Mayfeld, but we only saw the Slave 1 land and Din working with Cara to get the information he needed. Apparently, this scene was meant to also feature Boba Fett meeting with Greef Karga outside the Slave 1 after they all arrived on planet.

The reason this deleted scene could be interesting is that it could have informed the audience if Boba and Greef knew each other before this meeting. Considering that Greef ran the Bounty Hunter guild, and Boba was a bounty hunter, then there’s a great chance they knew each other, or have worked together before this deleted scene. It would have added some nice backstory in for both characters if the scene was left in and their relationship defined, but it also sets up potential for The Book of Boba Fett. If anything, we can bank on the two knowing each other in any capacity thanks to these deleted scene.

If these two do know each other, then there’s a great chance they’ll need each other for something bounty hunter-ish in TBoBF, so knowing that they have at least met in The Mandalorian timeline opens up potential for Greef to show up in Boba’s show, which is more than likely going to be The Mandalorian Season 2.5 anyway.

Nick and I will talk more about this reveal on today’s episode of the SWTS, so don’t forget to tune into the Star Wars Time Show on a weekly basis via our podcast platforms or via YouTube if you prefer the livestream angle. Thanks for the tip on Discord fans, and to WikiofNerds! 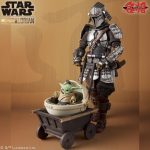 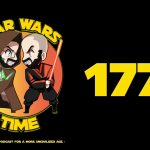