Disney’s CEO, Bob Iger, is out promoting his new book, The Ride of a Lifetime: LESSONS LEARNED FROM 15 YEARS AS CEO OF THE WALT DISNEY COMPANY, and in it are a few excerpts on the deal he made with George Lucas to buy Star Wars, as well as George’s initial involvement in The Force Awakens.

While some of the anecdotes he told have been out in the public for awhile, it’s still interesting to hear it directly from the man behind the move to buy Star Wars. Let’s just say that George felt a bit betrayed at first due to some mismanagement by Iger, especially on TFA, but when it came to what’s important — making cash — George wasn’t going to let his personal opinions ruin Disney’s take on Star Wars.

These excerpts all come from Reddit, but can be found in the book.

Bob on George getting paid to provide treatments for Star Wars 7-9:

At some point in the process, George told me that he had completed outlines for three new movies. He agreed to send us three copies of the outlines: one for me; one for Alan Braverman; and one for Alan Horn, who’d just been hired to run our studio. Alan Horn and I read George’s outlines and decided we needed to buy them, though we made clear in the purchase agreement that we would not be contractually obligated to adhere to the plot lines he’d laid out.

Bob on George not having any creative control, but committing to being a consultant when called upon begrudgingly:

He knew that I was going to stand firm on the question of creative control, but it wasn’t an easy thing for him to accept. And so he reluctantly agreed to be available to consult with us at our request. I promised that we would be open to his ideas (this was not a hard promise to make; of course we would be open to George Lucas’s ideas), but like the outlines, we would be under no obligation.

Bob on fucking up the introduction of The Force Awakens script to George:

Early on, Kathy brought J.J. and Michael Arndt up to Northern California to meet with George at his ranch and talk about their ideas for the film. George immediately got upset as they began to describe the plot and it dawned on him that we weren’t using one of the stories he submitted during the negotiations.

The truth was, Kathy, J.J., Alan, and I had discussed the direction in which the saga should go, and we all agreed that it wasn’t what George had outlined. George knew we weren’t contractually bound to anything, but he thought that our buying the story treatments was a tacit promise that we’d follow them, and he was disappointed that his story was being discarded. I’d been so careful since our first conversation not to mislead him in any way, and I didn’t think I had now, but I could have handled it better. I should have prepared him for the meeting with J.J. and Michael and told him about our conversations, that we felt it was better to go in another direction. I could have talked through this with him and possibly avoided angering him by not surprising him. Now, in the first meeting with him about the future of Star Wars, George felt betrayed, and while this whole process would never have been easy for him, we’d gotten off to an unnecessarily rocky start.

I have to say this revelation makes me kind of sad. I do blame Bob for fumbling this, as he admits he did himself. Just seems like they should have known the Maker wouldn’t appreciate being bamboozled, or misled, so why do the guy like that. They had deals and language in place that didn’t force them to use George’s ideas, but they kind of cast him aside without any thought, and then wanted his opinion without letting him know that his own stories were scrapped.

This slight probably led to George’s unfavorable reaction to TFA, which Bob described as:

Just prior to the global release, Kathy screened The Force Awakens for George. He didn’t hide his disappointment. “There’s nothing new,” he said. In each of the films in the original trilogy, it was important to him to present new worlds, new stories, new characters, and new technologies. In this one, he said, “There weren’t enough visual or technical leaps forward.” He wasn’t wrong, but he also wasn’t appreciating the pressure we were under to give ardent fans a film that felt quintessentially Star Wars. We’d intentionally created a world that was visually and tonally connected to the earlier films, to not stray too far from what people loved and expected, and George was criticizing us for the very thing we were trying to do. Looking back with the perspective of several years and a few more Star Wars films, I believe J.J. achieved the near-impossible, creating a perfect bridge between what had been and what was to come.

I have to take Bob’s side on this. We now see how fans reacted to a Star Wars movie that tries new things, so I get what Disney and J.J. had to do with TFA, and I still think it’s a great Star Wars movie.

The reason you probably didn’t hear about George’s disgust of TFA is because Disney made him sign a “Don’t Talk Shit” agreement, which Bob describes below:

At least George is no dummy when it comes to making bank!

Get Ready for Triple Force Friday 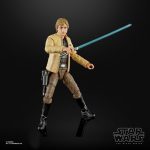