Like the Neo Boba, there aren’t any details for this figure outside of the teaser image above. In fact, it doesn’t even have a RSVP page like Fett did, so information is scant to say the least. I’m hoping for an actual face sculpt and a head with a helmet for this character, and if we get that I think it’ll be in the $260 plus range. I also believe, like Boba, that she won’t release until later in 2022.

Stay tuned for details as they become available. 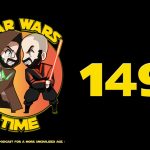