Two new Star Wars Black Series figures have been revealed as Target exclusives in the form of characters from Star Wars Galaxy’s Edge, and they are Captain Cardinal and DJ R-3X.

A few other exclusives are also available at Target, or were, depending if you were lucky enough to get the stealth announcement. These include a Funko Pop, a 3.75″ scale Falcon, a R/C droid, and a LEGO set.

Unfortunately, Captain Cardinal is already pre-order sold out, as well as the Falcon, the LEGO set, and the Funko, which is odd, since there were only officially announced sometime earlier today. We heard about it this morning via Exclu, so these exclusives don’t appear to have been given a proper reveal, at least in terms of typical news drop windows, so the information got out, Lucasfilm dropped their post, and then fans and scalpers flooded Target.com with pre-orders for the coveted exclusives.

Hopefully Cardinal and the others will be back in stock when they release later this Summer, so bookmark Target’s Star Wars exclusives page just in case. A few like DJ are still up for pre-order, probably because he’s not that enticing unless you have a fondness for his days as a Star Tours host. 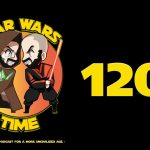