While talking with Vulture about The King of Staten Island, Bill Burr made it pretty clear that he won’t be returning as Mayfeld in The Mandalorian Season 2.

Check out his response below to see for yourself:

Anything else on the horizon? Any more Mandalorian or maybe Better Call Saul?
No, none of that. Once these two things [King of Staten Island and F Is for Family] come out on the same day, the well is dry. I got nothing. So we shall see.

Now he is a comedian, so he could be busting balls, but he also sounds pretty adamant about not having any other TV/film projects in the works, so I do think Mayfeld is out for a Season 2 reappearance.

There’s always Season 3 right! In all honesty, Mayfeld could return, but in the grand scheme of things his character is minor to the story of Mando and the Child, so there really is no need to bring him back right away. It would be cool to see him a few seasons down the road try to foil Mando over his lock up though, so hopefully Burr’s character isn’t gone for good. 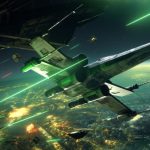 Star Wars: Squadrons Releasing October 2nd and Will Support VR on PlayStation and PC – New Trailer and Screens Shown Off