Bill Burr has long been known as the comedian who loves to make fun of Star Wars fans. He does it pretty often both on stage and on various podcasts he either hosts or guest stars on, so many people found it surprising when he was cast as Mayfeld in The Mandalorian. Why cast someone who berates the fan base? Well, it turns out that Jon Favreau thought it would be funny to do so. Here is a quote from Burr from the Your Mom’s House podcast.

“I went to Mike Binder’s birthday party and Jon was there,” Burr expllained. “He said, ‘Hey, we’re writing this thing and we kind of have you in mind, you wanna do it?’ And I was like ‘well, I don’t know Jon. I’ve teased Star Wars people a lot.’ And he goes, ‘I know I listen to the podcast, I think it would be funny if you got in it.’ My wife was kicking me under the table and I was like, ‘All right, I’ll do it.’”

Turns out that Favreau was right. Burr’s performance as Mayfeld in season 2 was one of the most praised in the series thus far. There is no word yet if Burr will appear again in season 3 of The Mandalorian, but the door is definitely open to his return since Mayfeld is still kicking his way around the galaxy. 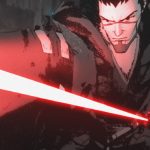 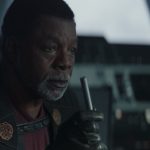