The Chosen One update is live in Star Wars Battlefront II, which means the actual Chosen One, Anakin Skywalker, is now a playable character in the game.

There are a few other changes that came with this update too, but who cares about that stuff, we all know what really matters with this update, and that’s the arrival of Daddy Skywalker. You know, the Hater of Sand! Or, the most important Star Wars character to have his tale mutilated in the Prequel films, but was then redeemed by his excellent portrayal in The Clone Wars!

Ok, I may have some issues with how Anakin’s story was showcased in the Prequels, but that’s not why we’re here, you can listen to those rants on the Podcast.

Anyway, DICE put out some new gameplay footage of Anakin in action in Battlefront II, and it is truly glorious to behold. The visuals are silky smooth, but more importantly, the gameplay provides perfect looks at Anakin’s moves and abilities. He just looks fantastic!

Head on up above to check him out! 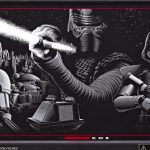