I may not like to play Star Wars Battlefront 2, but I surely appreciate looking at it. It’s a damn good looking game, especially on a high-end PC, which is why we are tuned into the Cinematic Captures YouTube channel, which provides gorgeous clips from the game with the HUD stripped out to make them look like film clips.

One of the channel’s latest shares features a split screen comparison of Anakin Skywalker and Darth Vader performing the same actions. Call it the duality of the Chosen One if you will, but there’s just something awesome about watching Anakin perform various action that are in turn mirrored by Darth Vader.

It allows you to see how Vader still moves like Anakin, but not as gracefully and quickly thanks to his injuries and being trapped in his suit. You can see how Vader has to make up for his physical limitations with raw power and anger, where Anakin still floats like a butterfly and stings like a bee, albeit with a hint of rage to most of his movements.

It’s a fun video to see how the Chosen One changed physically after he became the Dark Lord of the Sith and suffered horrific injuries because he didn’t believe Obi-Wan having the high ground was a big deal. Check it out above! 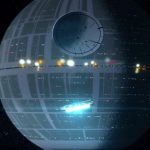