The Bad Batch continued to entertain this week with “Entombed”, which is the fifth episode of the show’s second season. Much like “Faster”, this episode mostly stuck to a self-contained story without much expansion on the overarching narrative of the Empire’s rise and choking of the galaxy. It was definitely fun and Indiana Jones-esque though, so head on down below to check out the review.

The episode did touch on the notion of Ancients, and past advanced Star Wars civilizations, so both the Rakatan and Zeffo came to mind, but it doesn’t seem like the series will come back to this thread anytime soon. More speculation on this topic will take place next week on the Star Wars Time Show livestream, so get synced in by using the links after the script.

Bad Batch continued the trend of entertainment-only episodes with Entombed, which like last week’s episode packed in some fun and excitement, but it didn’t provide any expansion on worthwhile lore from the era the show covers.

Again, that’s not saying this was a waste of life episode, but if you were looking for new insights into the empire’s tightening of its grip on the galaxy, crosshair’s state of mind, cody’s whereabouts, Rex’s message, or anything of narrative note beyond the notion of Star Wars Ancients, then you will be a bit let down.

Although, if you’re a fan of adventure and Indiana Jones or those based on him like Drake from Uncharted, then you definitely were entertained and reminded of those properties thanks to the quest for the heart of the mountain.

Quite frankly, the star of this episode is Kevin Kiner’s score, which most definitely leaned hard into John Williams’ Indiana Jones themes. The music really intensified the mysterious nature of the episode, while also adding to the tension once the twist was revealed that they weren’t in a cave after all.

This episode did pose a few interesting Star Wars lore questions though, such as who were the ancients Phee was talking about that more than likely built the mech. Why was this planet uninhabited? Why did the mech seem to purposefully go after other mechanical things like Mel and the Batch’s ship?

Both the Rakatan and Zeffo, two ancient Star Wars races, came to mind, but nothing really hinted at either being the actual Ancients this episode put forward. One could argue the mech would be something very Rakatan in nature due to its ability to destroy, while others could argue that its puzzles and design aesthetic resembled what was seen from the Zeffo on Zeffo in Jedi Fallen Order.

It would have been nice to get a more clear through line to either of these canon-based ancient races, but for now we can only speculate on who created the mech and its purpose.

When it comes down to it, Star Wars Animated series will always have runs like this. The Clone Wars and Rebels both had mostly self-contained episodes, and so does Bad Batch. It’s just a product of the medium, but it’s not a bad thing. This episode was entertaining and fun with elements of Indiana Jones sprinkled in, but it would have been nice to get a bit of the global conflict of this era back into focus.

How about some top moments.

Like last week, these were few and far between, but I have to begin with the track that was used while the team was solving the first puzzle in the room with the moving walls. Kiner absolutely nailed the score and it 100% evoked memories of Doctor Jones solving ancient puzzles throughout his four films. The music really intensified the tension and excitement, and helped set the stage for the rest of the treasure hunt.

And the final top moment is the activation of the mech. It was a nice little twist to their spelunking adventure and it provided some awesome visuals and destruction. Its ties to an Ancient race were also intriguing, and while I don’t think the series will ever return to the mystery of the mech and why it was created and who created it, it was cool to see Bad Batch exploring Star Wars’ mystical past.

Nick and I will talk more about “Entombed” on next week’s episode of the SWTS, so don’t forget to tune into the Star Wars Time Show on a weekly basis via our podcast platforms or via YouTube if you prefer the livestream angle. 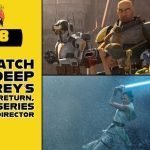