The Empire takes center stage in the latest episode of The Bad Batch, so if you felt a bit shortchanged on bad guys in the premiere, that was fixed in The Solitary Clone.

Please head on down below to watch or read our full review of the episode.

Bad Batch Episode 3, The Solitary Clone, checked all of the Imperial boxes fans may have felt went unchecked in the Season premiere thanks to its singular focus on the Empire’s continued push to provide peace and order to the galaxy by forcing independent systems into it folds.

The episode brilliantly showcased both to viewers and the clones, at least those who aren’t hellbent on convincing themselves they’re doing the right thing by committing atrocities in the name of peace and following orders like Crosshair, that the Empire is an awful machination unlawfully occupying planets under the guise of ushering in a new era of tranquility.

While this was showcased a bit last week and during Season 1, this episode in particular really drove home how tyrannical the Empire is in its overthrowing of Desix’s Governor Ames. Desix is independent and wasn’t a part of the Republic, yet the Empire is forcing itself upon its people as if having an unwanted occupation force is what free systems have needed all along to realize their freedom.

The character of Tawni Ames was used perfectly to showcase the jacked up thinking of the clones thanks to their imperial overlords. Cody was all in on the mission until he and Ames started negotiating. You could see her words were affecting him, and making him reconsider the mission and ultimately his role in the empire. He finally started to realize what will take most of the galaxy years to figure out, and that’s the fact that the Empire has become the bad guys, and what it is doing is not right, and nothing an honorable person should be a part of.

It doesn’t seem that Cody is the only one that learned this lesson, because even though his ignorance and adherence to order will compel him to keep following shady orders for the time being, it did feel like Cody’s actions and subsequent talk on choices and how clones have to live with them hit hard with Crosshair.

The dude just looks so alone and isolated that you have to wonder what may send him over the edge to finally inch towards redemption, or if he’ll stick to his guns and ignorantly go down in dishonor as he continues to commit atrocities in the name of the Empire’s drive for peace and order.

Galactic politics aside, this episode also kicked butt thanks to how closely it resembled an old episode of The Clone Wars complete with droid battles and clone tactics out the wazoo. The battle scenes were great, and the music accompanying them was even better. This episode just had that TCW flair that fans know and love, which made it feel like one of Bad Batch’s best to date.

Let’s start with the information dump that Crosshair was left on Kamino to anguish and suffer for 32 days before the empire picked him back up. That’s intense, and another example of how poorly the empire thought of clone forces. This may also explain why Rampart bought his story that Clone Force 99 bit the bullet and didn’t survive the orbital bombardment. He was in bad enough shape to require months of medical leave, so he was probably delirious, making it easier for Rampart to believe his report.

Of course Rampart is evil enough to know that Crosshair lied and keep using him for active missions, but the whole being stranded ordeal may be one reason why Rampart believed whatever Crosshair told him when the empire picked him up.

Obviously Cody’s return makes this top moments list, but that wasn’t his only time in the sun. While this moment was cool and some interesting dialogue was exchanged between him and Crosshair at what seems to be a Clone memorial wall, Cody yielded some sage wisdom and actions deeper into the episode.

Crosshair’s two impressive take downs have to be mentioned. The first is his tank kill in which he shot directly down its canon to blow it up, and the second is another impressive mirror puck chain kill to take out the tactical droid. The dude may be messed in the head, but he’s clearly one of the most skilled Clone warriors of all-time.

Obi-Wan Kenobi would have agreed with this next choice, because Cody’s negotiations with Ames were nothing short of what the General would have done himself. It was as if Cody was channeling his old buddy while trying to defuse the standoff with Ames. He even got Crosshair to drop his rifle until Grotton gave the order to execute. There were other moments in the episode, but this one in particular was clearly the nail in the coffin when it came to Cody’s allegiance to the empire. He was visually affected by Ames’ truths on peace, and the whole ordeal opened his eyes to what the Empire is really doing.

Finally, as advertised, Cody gets another top moment, and this honor is for his talk on choices with Crosshair at the end. You could tell the Desix mission wrecked him, so he was in his own way leaving Crosshair with some very important advice on how to handle his future. His line about clones being able to make their own choices but then have to live with them is an ominous warning to Crosshair’s past transgressions and potential future decisions, so hopefully the message eventually gets through to our solitary clone.

Nick and I will fully breakdown this episode on next week’s episode of the SWTS, so don’t forget to tune into the Star Wars Time Show on a weekly basis via our podcast platforms or via YouTube if you prefer the livestream angle. 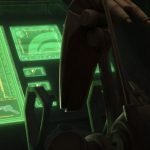 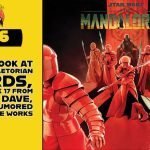