Heyyy, Heyyyy! Babu Frik is definitely one of the highlights from The Rise of Skywalker, but according to a new article in Empire, he wasn’t supposed to live. Yeah, they were going to kill Babu, and apparently Mr. Spielberg is a big reason why he lived.

According to Neal Scanlan, J.J. screened the movie for Steve, but the mega Director wanted to know what happened to Babu, so the scene we see during the fleet arrival was added in after that conversation.

“It could be a rumour, but I believe J.J. screened the movie for Steven Spielberg, and at the end Spielberg said, ‘What happened to Babu?’. Everybody thought, ‘Oh God, what did happen to Babu?’”

Oh? So the little dude was never really meant to survive the Kijimi attack, but thanks to his new fan, it seems he was saved in post. Concept artist Ivan Manzella had more to add to the mystery of the Babu:

“I think he was going to die originally – I think the AD shot that. When the planet [Kijimi] was blown up, he was on it.”

Those bastards! How could you vaporize the Frik? Luckily, it seems that ILM had shot a bunch of sequences with the little guy, so his Heyy, Heyy, scene with Zori was added in after the fact as Scanlan explained:

“We shot several other sequences. The ILM guys found one, lifted out Babu and put him into Zorii’s ship at the end.”

How’s that for kismet?

‘The Clone Wars’ Series Finale to Air May 4th, Plus Awesome Stills Released for “Old Friends Not Forgotten” Episode 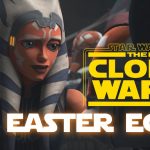