Thanks to the visual guide for The Rise of Skywalker, as well as some old rumors about an infamous bounty hunter showing up in the film, we now know that Dengar, at least a heavily modified version of himself, appeared in the movie.

In particular, he shows up during the scene on Kijimi when the good guys go to Babu Frik’s workshop. He is one of the patrons in the bar, but you’d never have known without the knowledge below.

It appears that Dengar had been modifying himself over the years to keep a leg up on his fellow bounty hunters, but all of the cybernetic modifications rendered him unrecognizable. So much so that he now uses an alias of Rothgar Deng, which oddly enough basically sounds like the pig Latin form of Dengar.

I am going with Rothgar being Dengar, but there’s no way any of us would have ever known based on his new appearance, so it was a super deep cut style Easter egg if you will. This is why no one noticed, and why a tweet from January is relevant today.

EA Finally Confirms That Star Wars Jedi: Fallen Order is the Start of a New Franchise 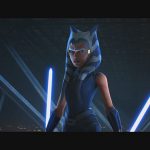 Filoni Speaks on the Future of ‘Rebels’ Character Stories, Ahsoka in The Mandalorian, and Directing in Season 2