Well, nothing has happened in terms of getting the Episode IX title or a trailer for the film, so I’m starting to think that Daniels, like Hamill, and Boyega before him, is just having fun with his Star Wars fans. He’s sent out a few followup tweets to the one that got me to do a video on it, and it’s clear he’s having fun, but that someone has correctly guessed at what he is cryptically tweeting about.

So this reveal isn’t a title or a trailer? It’s an object, what the hell is happening 3PO!

He then went on not tease that someone is on the right track:

Alright TRAV, wherever you are, fill us in on your guess, because Daniels is getting too good at this Star Wars fan trolling game! 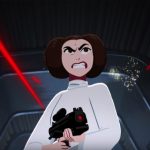