Anthony Daniels has revealed to the world that his C-3PO character has wrapped principal photography on Star Wars: Episode IX, and that he would be leaving the production to return to normal life.

Daniels teased in the Tweet that he and the rest of the crew has been working on something exceptional, which makes it sad for himself and his alter ego to say goodbye.

Today was 3PO’s last on Episode IX. He’s sad – so am I. But we’re so proud to have worked with such a lovely, talented cast & crew lead by J.J. & Kathy. I’ll miss everyone but I’m glad to know that we’ve been making something exceptional together, to share with the waiting world.

Considering that C-3PO’s work has wrapped on Star Wars: Episode IX’s production, it could hint that the shoot is coming to an end as a whole. I say this because as big stars start leaving a shoot, others will follow, which signals the end of principal photography. Now that doesn’t mean their work is done for good, there will always be reshoots, but now that an icon like Daniels has completed his work, there’s a great chance others will be wrapping too. And all that means for us is nothing really, because we still have to wait on the powers-at-be to give us little bits of information to amp us up for the film’s December release.

Stay tuned for more Episode IX news as it comes out! 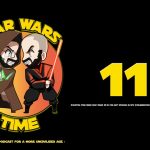