The tuning fork gun wielding Fett from the animated Star Wars holiday special is getting his own GameStop exclusive Funko Pop this July, and you can pre-order him now. I’ve tried my best to cut down on collecting Pops, but this little guy will be impossible to pick up. He’s been Pop-ified before, but only old school Pop collectors like me have him, because that version is now pricy on the black markets.

This version is much more detailed though and makes for a better piece, so head over to GameStop to pre-order him today! 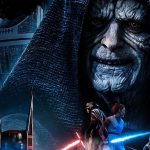