The Andor series finally got some love yesterday at the Disney Investor’s presentation, which was more like an early Christmas for Star Wars fans thanks to all of the reveals and updates that were shown off.

Anyway, a sizzle reel was previewed for Andor, which isn’t due out until 2022 at this point, and at the end of it some concept art was teased, giving fans their first real look at what may be in store for this Rogue One prequel series.

You can check out the concept art below, and some of it is enlightening. I’m assuming the city with Republic cruisers as buildings is where Cassian grew up.

The shot with all the pods and interrogation droids could be of an Imperial prison or a conditioning center.

Another piece of art features Cassian meeting with rebels, but there’s also an imperial officers, so he’s either a rebel preparing for a mission, or a convert.

The others are mostly action oriented, but it does look like we will get Cassian in an A-Wing of some sorts and it doesn’t appear as if his mission will play out they way he intended.

Nick and I will talk more about Andor in next week’s episode of the SWTS, so don’t forget to tune into the Star Wars Time Show on a weekly basis via our podcast platforms or via YouTube if you prefer the livestream angle. 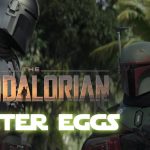 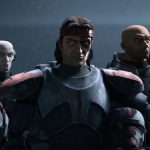