Now that the first season of Andor has been fully unleashed unto the world, creator Tony Gilroy is talking about his plans for the second season, which began filming this week.

He talked about how the season will begin with a time jump, which sounds like a slightly different plan than what he laid out over the summer, but there will now be a skip from the end of Season 1. He also talked about the importance of K-2SO, and who was filmed first for the start of Season 2. To top things off, he drops some wisdom on the finale and how some of the characters were feeling after the big Ferrix showdown.

Check out the highlights below!

UPDATE – New quotes have been added to the Time Jump section from a Deadline interview.

According to Tony, Andor Season 2 will not pickup directly after Season 1, which sounds like a new plan if you read his quotes from the above article. Andor was always supposed to cover five years of time before the Battle of Yavin. Season 1 covered a year, so Season 2 was supposed to cover four years using blocks of three episodes to span a year, or to at least cover a particular year. It now sounds like a full year will be skipped between seasons, so Season 2 will technically only be covering three years of time before the Yavin showdown.

“It’ll be a year later after what you just saw. [A] great deal has happened in the interim.”

This will allow Season 2 to start from a fresh perspective and have Cassian more ingrained into the rebellion, but it does beg the question of how the season will then portray the final three years of time before Yavin.

Tony did shed a bit more light on how the Season 2 time jumps will take place with THR:

They are actually super condensed. They’re like three days, four days, two weeks, four days. They’re really tight. It’s cool that way. That’s what’s exciting about it. You can go away for a year, come back for Friday, Saturday and Sunday and then jump a year. So they won’t be spread out. It won’t be like block two takes place over another year. So they’re very concentrated, which is fun. And then you have to account for all the negative space and what happened in the interim.

So, when we come back for our second half, it’ll be a year later. An entire year will have gone on. All kinds of things will have happened, and we’ll pick up the show; sometimes we’ll do a week, we’ll do three days, we’ll do four days, whatever, and then we’ll drop a year in between.

The last one will be the last, I don’t know what it is, three, four days before the beginning of Rogue One, and then our final scene has always been known, which will be walking him into the first scene of Rogue One. So, we will be dealing with time in a different way, but it’ll be blocks of three. That’ll be our principle.

Essentially, the blocks will only cover short periods of time within a year, and then the next block will tackle the next year, but fans won’t see everything that has happened in-between.

Tony confirmed that K2 will be an important piece of the narrative in Season 2, which shouldn’t surprise anyone. I’m still holding out hope that K2 gets some from of B2 uploaded to him to provide a nice through line from Season 1 all the way through K2’s death in Rogue One.

“Well, I think that’s one of the responsibilities of Part 2. Obviously, if we’re going to walk into Rogue, we have to deal with that.”

You may think he’s a creep, but based on the first day of filming for Andor 2, it sounds like everyone’s favorite law and order loving weirdo is back.

According to Tony, the first scene they shot for Season 2 involved Syril Karn!

Tony On the Andor Finale

In a chat with THR, Tony talked about some of the finale moments, including the one with Luthen and Cassian. Here is his reply on what Luthen was thinking.

Yeah, it’s a big day for Luthen. When he’s listening to Maarva’s speech, it’s not pride of ownership on his part. It is and it isn’t, but it’s another corner of the farm he’s trying to grow. So he’sTo very proud when he hears that. And my God, to finish up the day and have this new asset walk in — who’s been through all this stuff and is still standing and you managed not to kill — and he is now basically saying, “Alright, I’m in. Blood oath,” that’s a pretty good day, I think.

I too felt like Luthen was pleased with how the day played out, even though it meant not killing Andor. He realized how committed Cassian was now, so to him, he just gained a huge asset in the fight against the Empire, so why wouldn’t he smile.

Tony also talked about why Mon went through with the Davos deal even though she created the gambling story to cover her missing credits.

She’s just trying to cover all the tracks. Sculdun originally came in and said, “Oh, I know your husband.” So, in the end, Sculdun probably thinks that this is really about her husband’s gambling debts. He doesn’t know what the real purposes are. But what I’m saying there is that she’s just covering all the bases. If anybody comes looking, if anybody’s wondering why she might be borrowing money or if Sculdun is wondering why she might be borrowing money, she can lay it off on poor Peerin [Alastair Mackenzie].

This all makes sense, so Mon went all in on covering herself and further creating a wedge between her and her family in the name of rebellion.

Gilroy also talked about the post-credit scene and if the Death Star would play a bigger role in season 2. It won’t.

It’ll still be the looming threat. Rogue One is all about discovering what it is. [Season two is] about who picks up the final breadcrumbs that lead to the beginning of Rogue One. In RogueOne, Cassian goes to the Ring of Kafrene to meet Tivik, who is from Saw’s group, and he says, “Oh my God, it’s a planet killer.” Cassian knows some shit, but he’s looking for answers. So we’ll [cover] the breadcrumbs that lead up to that, sure. But we have a situation where Cassian will never know that what he was building is actually the machine that’s going to kill him.

Tony also talked about the final shot of Season 2, and how close it will be to the beginning of Rogue One.

No, we’re going to go linearly into it. It’ll be him walking out to get on the ship and go there. So we’re not going to go into Rogue One.

Finally, Tony revealed if they’d revisit Cassian’s sister, which at this point seems like a MacGuffin at best.

That’s TBD. I don’t want to get out in front of that question.

That’s one way to keep a secret, or one way to dodge a question about something you know you’re not covering. 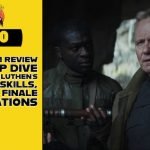