Collider sat down with Andor creator Tony Gilroy recently, and he dropped all sorts of news nuggets for the show’s planned second and final season.

Among the reveals were the season’s directors, who include Ariel Kleiman (Yellowjackets and The Resort), Janus Metz (All the Old Knives), and Alonso Ruizpalacios (Narcos: Mexico and Outer Range).

Like Andor’s first season, each director will be given blocks of episodes to direct that will tell a complete story from start to finish. Each three episode block will tell a years worth of story in Season 2, so the time jumps will be much more impactful this season as well.

Tony also revealed the writing team and the start of filming for Andor Season 2, which includes two writers from season one in Dan Gilroy (Aldhani arc for S1) and Beau Willimon (Narkina 5 arc for S1), and new member to the Andor team, Tom Bissell (Various video game titles and The Mosquito Coast). The shoot date is set for November 21, 2022.

Finally, Tony dropped a location that will be featured in Andor season 2, and it really shouldn’t surprise anyone based on the fact that this series is a prequel to Rogue One.

Like previously mentioned, a return to Yavin for Cassian shouldn’t surprise anyone, but it’s nice to get official confirmation from the show runner.

Nick and I will talk more about Andor Season 2 on next week’s episode of the SWTS, so don’t forget to tune into the Star Wars Time Show on a weekly basis via our podcast platforms or via YouTube if you prefer the livestream angle. 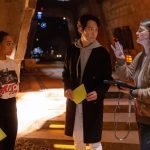