Andor featured another middle-act episode with Nobody’s Listening, which really helped to ramp up the tension and anxiety for this three-episode arc that started with Andor Episode 8.

Each scene added more layers to this already deep Star Wars series, and helped to move each of the main narratives closer to their Season one conclusions. It may have lacked action, but it made up for that with some more great insights into the Imperial machine, and those who sought to tear it down.

Head on down below to check out the full review.

Andor Episode 9, aka, Nobody’s listening, do you understand Kino, provided a nice ramping up of Cassian’s ordeal in prison, while also pulling the net tighter on his Ferrix friends thanks to Meero breaking some Rebel eggs to advance her search for Luthen via Andor.

The prison scenes were especially excellent, which should be credited to the acting skills of all the cast members, but one must put the spotlight on Andy Serkis, who absolutely sleighs his role as Kino Loy, the supervisor of unit 5-2-D.

Serkis just expertly nails this character and the faux power he has over his shift mates, as well as his no nonsense dedication to the process to ensure his release from prison. Early in the episode Kino wants nothing to do with the idea of escape, and Andy does a fantastic job at showcasing Kino’s annoyance over Cassian’s questions, and the general unrest his shift mates show while they learn about some problems of level 2.

Andy then, with just his facial expressions and one simple line, completely changes the tone and feel of Kino upon learning from the doctor that prisoners aren’t actually freed anymore. They’re just recycled, which finally cracks the venneer of his closed eye dedication to the process, and clearly sends him on a path to find his freedom and that of his shift mates through escape. Andy’s performance as the episode closes is perfect, and one of the reasons this episode hits.

Generally though, this episode just did a great job at progressing Andor’s various plot lines and allowing for more character growth. Meero in particular seems to be embracing her new role and power, because she is quickly becoming a pretty awful Imperial even though when we first met her we were sort of meant to feel bad for her and the way the ISB treated her. Now, she seems drunk with success and completely comfortable being a piece of crap, so her Imperial career is advancing brilliantly, and it has been unique to watch. Just when you thought she’d be a sympathetic female figure you realize that she’s just as deranged as other Imperial loyalists, and that says a ton considering Bix reminded us that the ISB is filled with the worst of the worst.

This episode definitely did it’s job playing the middle-act role, so all of the nuanced setup in the prison, on ferrix, and on coruscant, will all surely lead to a tension-filled nail biter next week as this particular story arc comes to a close and moves Andor towards its two-episode finale.

The opening scene between Meero and Bix and the subsequent A New Hope torture homage definitely stood out in this episode. As previously mentioned, it showcased just how determined and evil Dedra Meero truly is. The writers did a bang up job early on in the season making her a character audiences could somewhat sympathize with due to her situation with the ISB, because she seemed bullied by her peers and her points of view were heavily ignored.

Now that she has been given a long leash and has scored some brownie points, you can really start to see her for who she is, and that’s just another fascist helping the Empire keep its boot on the throat of freedom throughout the galaxy, and she seems to enjoy it. Her interrogation and torture of Bix felt like it was her favorite hobby, so this episode and scene did a great job at shifting Meero to a much darker tone. I’m not completely giving up on Meero potentially being Cassian’s sister, but after this scene, it is seeming unlikely unless she was brainwashed by her rescuers many years ago.

The senate chamber scene was another standout. Visually, it was a treat for your eyes, but narratively it did a great job at showing how corrupt and Banana Republic-esque the Senate has become at this point. Mon was essentially being cancelled by her peers for being against the PROD and the Emperor trying to take even more power from the citizens of the galaxy. While some senators clearly still supported Mon, the majority did not, and this scene served as another reminder to Mon that while frightening and dangerous, her commitment to the Rebellion is the only way forward to restore any sort of democracy to the galaxy.

Sticking with Mothma, her scene with her newly revealed cousin Vel Sartha was also a scene worth diving into. If anything, we got more backstory and insights into Vel, who is another Chandrillan and a relative of Mon Mothma. Vel mentioned an oath that they both took, which I’m assuming is to the Circle, and they made it seem as if Vel may have been the person to recruit Mon into the Circle and meeting Luthen in the first place. This type of lore is key, because it helps to tie legacy character deeper into new ones like Vel and Luthen, so hopefully we get even more insights into how they all became connected and united in rebelling against the empire.

Finally, and no, it’s not the creepy stalker Syril scene, but rather it’s the closing scene at the prison where Kino Loy finally lets himself process the fact that no one is getting out anymore, and that their only chance at freedom is to rebel through an escape. Serkis’ performance, and his line of No More than 12 are the standout moments from this episode period. You could both see and feel the change in Kino loy as he learned about the prisoner recycling scam, which just helped to ramp up the excitement and nerves for next week’s inevitable break out mission. Kino is pissed, and that’s not going to be a good thing for the guards at Narkina 5.

Hopefully he makes it out, but Loy’s destiny feels rooted in sacrifice, which is kind of the theme of Andor and Rogue One, so the connective tissue between them keeps getting stronger thanks to killer performances by cast members like Andy Serkis, and the rather brilliant writing featured throughout this series.

Nick and I will talk more about Giancarlo’s interview on next week’s episode of the SWTS, so don’t forget to tune into the Star Wars Time Show on a weekly basis via our podcast platforms or via YouTube if you prefer the livestream angle. 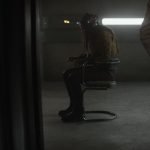 Andor Season 1 Episode 9 Easter Eggs, References, and Its Homage to A New Hope 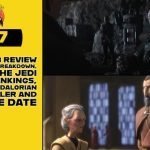