Since the end of the prequel era, people have debated a key missing fact in the Star Wars universe, who is Anakin Skywalker’s father? This answer to this question may have just been revealed via the final issue of Marvel’s current Darth Vader run of comics.

One of the more popular fan theories about Anakin’s father, and the one that I personally bought into, was that Darth Plagueis, Emperor Palpatine’s former master, manipulated the force to impregnante Shmi Skywalker. It seemed like this would fit perfectly. When we meet Anakin he is 9 years old, so take into account Shmi’s pregnancy and you are right around 10 years from The Phantom Menace as his point of conception. But, according to Palpatine himself, Plagueis had already taught his apprentice all he knew, so if Plagueis didn’t do it, there is only one other being that could have.

That’s right, it was none other than Darth Sidious himself! This information is revealed as Vader traverses through an afterlife portal. As he walks through the events of his life from childhood, he eventually sees the moment of his conception with Palpatine pulling the strings.

All along Palpatine knew the prophecy of the Chosen One born of the and used it against the Jedi in a masterful way. The Jedi way of thinking led them to believe that balance would result in the complete destruction of the Sith, but in reality, balance requires both the dark and the light.

Honestly, I was hoping that a reveal of this magnitude would have been made in a different way. The Star Wars comic books are a fantastic addition to the new expanded universe, but this specific revelation really needed to be presented in some sort of on-screen format, whether it be through a film or via a Darth Vader TV series.

Nevertheless, one of the most pieces of information in the entire Star Wars universe has finally been revealed to us in no uncertain terms. What is your opinion on this reveal? Do you think this explains a lot of Anakin’s actions and decisions or do you think this is another ruse of the dark side? 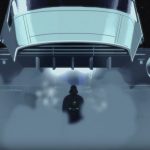 Darth Vader: Path of the Dark Side – An Animated Approach