The Disney Investors call is still live, but we are here to bring you all of the new Star Wars content that has been announced for Disney plus in the coming years.

Before any specifics were announced, Bob Iger revealed there will be 10 new and original Star Wars series coming to Disney+ in the coming years, and to give color to that claim, many of these series and other projects were announced. Take a look at the slate below.

Rangers of the New Republic – A new live action series set during the timeline of The Mandalorian and will intertwine with the stories told on The Mandalorian. No stars were announced for this show. Releasing December 2021.

Ahskoa – Starring Rosario Dawson as Ahsoka Tano. Live Action series set concurrently with Rangers of the New Republic and The Mandalorian. These shows will ‘culminate in a climactic story event’ that will tie all 3 series together. Set to release December 2021.

The Acolyte – A new live action Mystery Thriller series by Leslye Headland set in the final days of the High Republic Era.

A Droid Story – An animated project created by Lucasfilm Animation and ILM labs featuring a new Droid hero accompanied by R2-D2 and C-3PO. 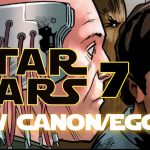