As reported by THR, Peter Ramsey, the director of Into The Spiderverse, is set to direct at least one episode of the upcoming Ahsoka series on Disney+.

Into the Spiderverse was Ramsey’s breakout project and since then he has started to move back into live-action features. He is currently working on 2 live action projects in addition to the work he will be doing on Ahsoka, Blood Count, a vampire thriller period piece, and Love in Vain, a biopic about Blues musician Robert Johnson.

It was Ramsey’s unique eye that made Spiderverse a stand out hit among animation and non-animation fans alike, so hopefully, he can bring some of those spidey senses to the Star Wars universe. 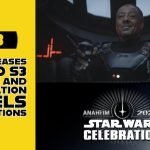